This was our creation for a contest at TheFeedFeed to use Ghiradelli Chocolate in a new S'mores recipe. So how exactly do you create and build on a classic Smore's that was created in the 1920's? Come into the campground and we'll talk about building a new, Italian-style cannoli.

Marshmallows, chocolate and graham crackers have been made for decades and decades, but it wasn't until 1927 when all three came together to create an iconic American treat that withstands the test of time. But is the Smore a cookie, a candy, a confection or a pastry? We say it's all those ingredients and much more, the Smore.

The basic Smore is still the number one favorite today-large, puffy white marshmallows, graham crackers and squares of chocolate, usually milk chocolate. Companies like Kraft and Hershey's still make a fortune every summer when it's camping and backyard barbecue season.

About 15 years ago, our love with Smore's took on a new level when fine dining restaurants and home cooks started creating all sorts of whimsical Smore's, and that's where we come in with our take on the tradition.

It's a trend that probably won't last long, but fun for a diner to have this brought to the table. Some restaurants even bring a small hibachi to the table and you build your own Smore.

Building the Layers, Melting the Mallow-

When you make a creative Smore today, the same basic layers created in 1927 still apply-

Today we can make S'mores year-round and we don't need a roaring campfire to do it, (although it's hard to replace cooking over a campfire).

A small kitchen torch is an essential tool we recommend. It perfectly chars marshmallows for S'mores and they won't fall off the stick into the fire. For this recipe it's easy to use a torch so you can get into all the nooks and crannies of the marshmallow without having to pull a hot, burning mallow off and try to stick it between two graham crackers. And just a whiff over the chocolate starts it melting.

Pro chefs use kitchen torches to sear the top of fish, quick char vegetables and all sorts of little techniques. It's safe, quick and gives you a lot more possibility with your cooking.

We have two more recipes that would be perfect for Campfire Cooking, or a Campfire theme party at home, one in a cast-iron skillet, another sandwich cookie with a melty, sweet, decadent filling. 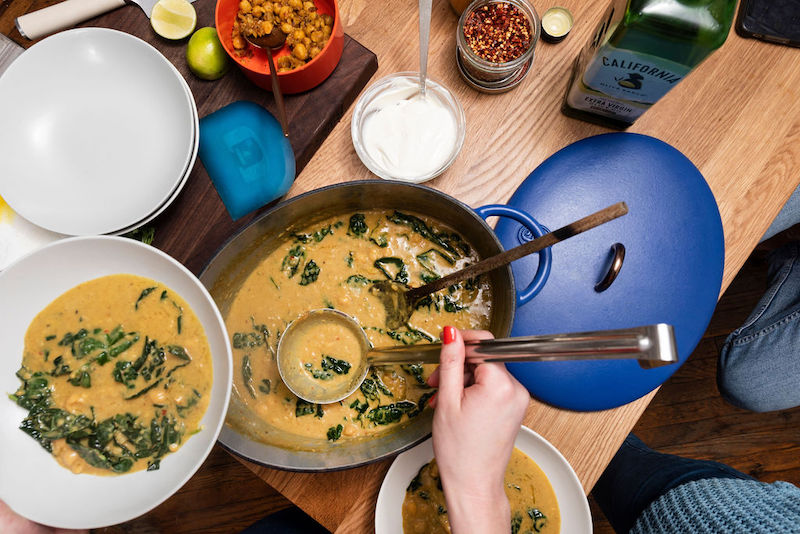 For the Graham Cracker Italian Cannoli-

For the Mascarpone Mallow-

Welcome into Today’s Home Kitchen where we celebrate our passion for food and cooking. Today’s home kitchens are a reflection of our communities, a blending of different cultures, flavors, textures, tastes, and foods.